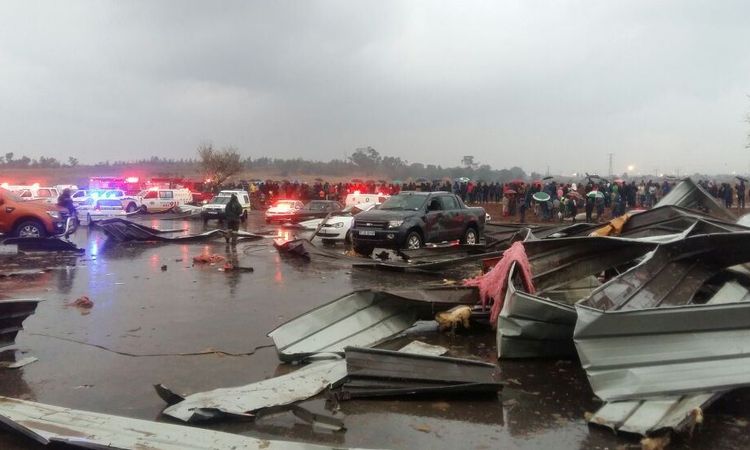 In the (somewhat unlikely) event that you are caught up in a storm with a tornado, here’s what to do.

Recognise the SIX signs of a tornado

Weather experts are still only able to predict an oncoming tornado just 20 minutes before it hits, so it is best to already be aware of the signs that a tornado will sweep into your area. There is no substitute for staying alert to the sky. Besides an obviously visible tornado, here are some things to look and listen for:

1. A strong, persistent rotation in the cloud base.
2. Whirling dust or debris on the ground under a cloud base. Tornadoes sometimes have no funnel.
3. Hail or heavy rain followed by either dead calm or a fast, intense wind shift. Many tornadoes are wrapped in heavy precipitation and can't be seen.
4. Day or night: Loud, continuous roar or rumble, which doesn't fade in a few seconds like thunder.
5. Night: Small, bright, blue-green to white flashes at ground level near a thunderstorm (as opposed to silvery lightning up in the clouds). These mean power lines are being snapped by very strong wind, possibly a tornado.
6. Night: Persistent lowering from the cloud base, illuminated or silhouetted by lightning (especially if it is on the ground or there is a blue-green-white power flash underneath). 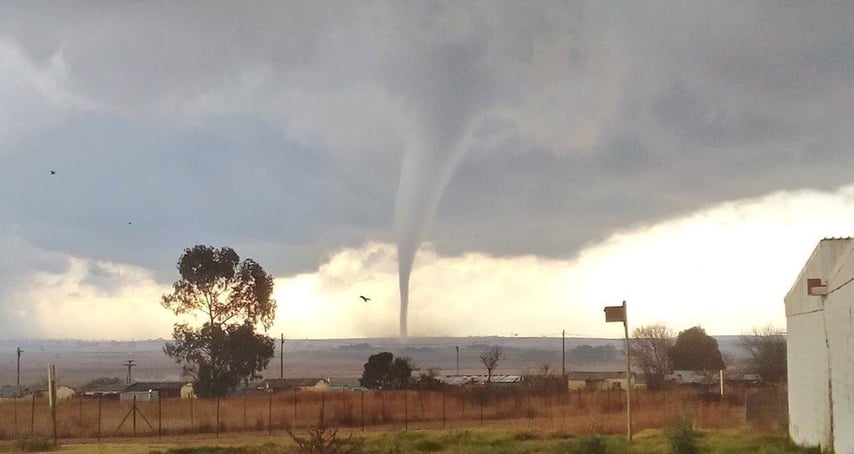 Nine safety measures to take depending on where you are

Scenario #1: If you’re in a house with a basement

Avoid windows. Get in the basement and under some kind of sturdy protection (a heavy table or work bench), or cover yourself with a mattress or sleeping bag. Know where very heavy objects rest on the floor above you (pianos, refrigerators, waterbeds, etc.) and do not go under the part of the floor where they are sitting. They may fall down through a weakened floor and crush you. Head protection, such as a helmet, can offer some protection also.

Scenario #2: If you’re in a house with no basement, a dorm, or an apartment

Avoid windows. Go to the lowest floor, to a small centre room (like a bathroom or closet), under a stairwell, or in an interior hallway with no windows. Crouch as low as possible to the floor, facing down, and cover your head with your hands. A bath tub may offer a shell of partial protection. Even in an interior room, you should cover yourself with some sort of thick padding (mattress, blankets, etc.), to protect against falling debris in case the roof and ceiling fail. A helmet can offer some protection against head injury.

Scenario #3: If you’re in an office building, hospital, nursing home or skyscraper

Go directly to an enclosed, windowless area in the centre of the building -- away from glass and on the lowest floor possible. Then, crouch down and cover your head. Interior stairwells are usually good places to take shelter, and if they are not crowded, will allow you to get to a lower level quickly. Stay off the elevators – you could be trapped in them if the power is lost.

Scenario #4: If you’re in a mobile home

Get out. Even if your home is tied down, it is not as safe as an underground shelter or permanent, sturdy building. Go to a shelter, or to a nearby permanent structure. If you have a tornado evacuation plan, use it. Most tornadoes can destroy even tied-down mobile homes, and it is best not to play the low odds that yours will make it.

Scenario #5: If you’re at school

Follow the drill. Go to the interior hall or windowless room in an orderly way as you are told. Crouch low, keep your head down, and protect the back of your head with your arms. Stay away from windows and large open rooms, such as gyms and auditoriums.

Scenario #6: If you’re in a car or truck

Vehicles are extremely risky in a tornado. There is no safe option when caught in a tornado in a car, only slightly less-dangerous ones. If the tornado is visible, far away, and the traffic is light, you may be able to drive out of its path by moving at right angles to the tornado. Seek shelter in a sturdy building, or somewhere underground if possible. If you are caught by extreme winds or flying debris, park the car as quickly and safely as possible, out of the traffic lanes. Stay in the car with your seat belt on. Put your head down below the windows, cover your head with your hands and with a blanket, coat, or other cushion if possible. If you can safely get noticeably lower than the level of the roadway, leave your car and lie in that area, covering your head with your hands. Avoid seeking shelter under bridges, which can create deadly traffic hazards while offering little protection against flying debris.

Scenario #7: If you’re in the open outdoors

If possible, seek shelter in a sturdy building. If not, lie flat and face down on low ground, protecting the back of your head with your arms. Get as far away from trees and cars as you can (they may be blown onto you in a tornado).

Scenario #8: If you’re in a shopping mall or large store

Do not panic. Watch for others. Move as quickly as possible to an interior bathroom, storage room or other small enclosed area, away from windows.

Scenario #9: If you’re in a church or theatre