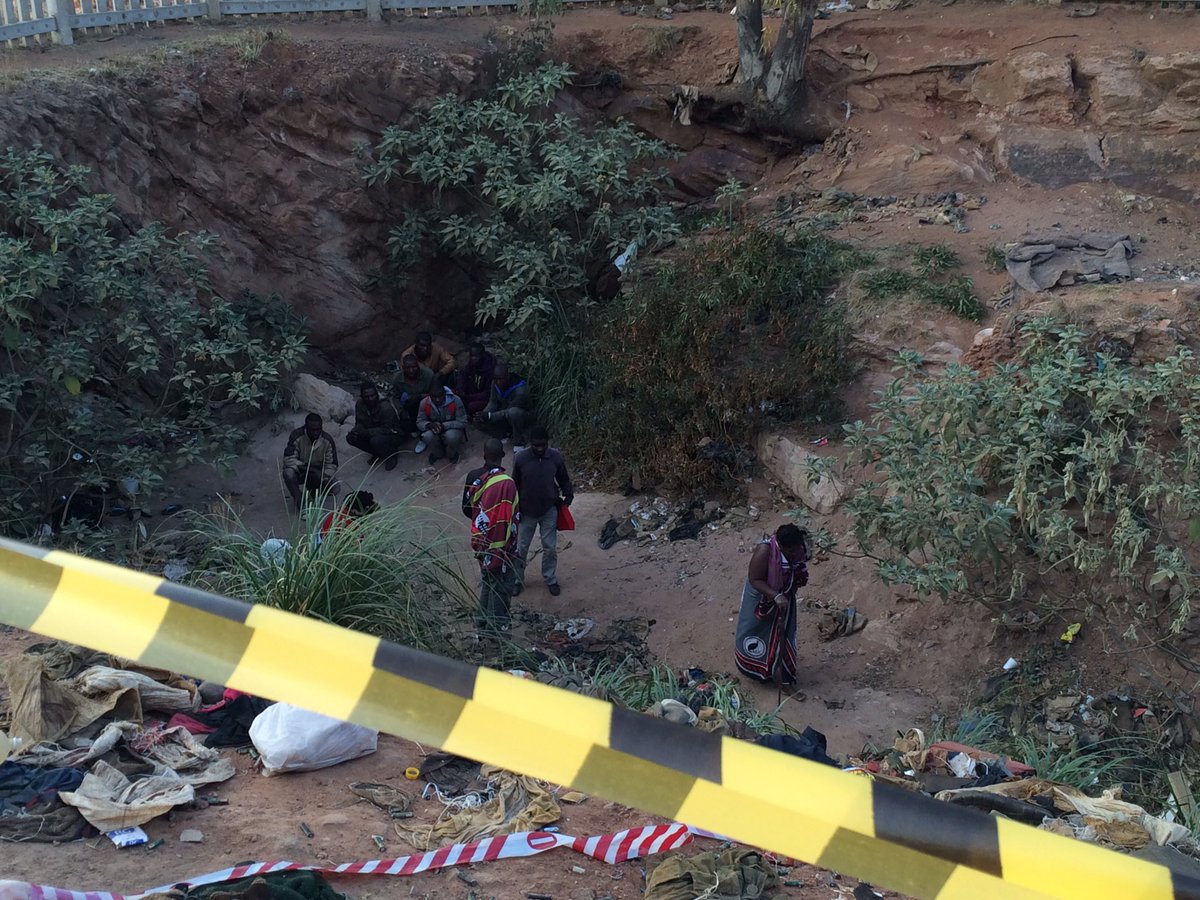 Johannesburg emergency services Synock Matobako says there are multiple groups that operate at this closed mine shaft. "There are many groups operating in this mine and in different areas within this mine."

Meanwhile, after four other people were rescued, police say two of the illegal miners have been hospitalised, while the other two have been arrested.

Illegal miners are an enormous issue at South African mines. And it raises the question of mine safety once again. Some may argue that illegal miners who willingly enter a disused mine are responsible for their own safety, and any risks that come with their actions. But, if a mine equips its operations and its workers while the mine is in use, when this kind of situation occurs, perhaps the potential loss of life and injury can be minimised. So let’s take a look at the safety measures a mine should have in place while in use.

Of course, we don’t expect mining companies to issue illegal miners with PPE, or to leave it behind when the mine closes for them to make use of, but it’s a fact that a mine can prevent many injuries by wearing the correct protective clothing/gear. In this section we discuss the correct clothing and gear required to perform many different mining activities.

ATGATT
What is ATGATT? It’s actually a motorcycling acronym used to remind motorcyclists to wear ‘all the gear all the time’ (ATGATT). It’s a commitment by bikers to wear personal protective clothing at all times. It has been found that mineworkers injured in mining accidents have often not followed protocol in wearing all the required gear at the time of an accident.

If mineworkers wear the following safety clothing, they already address many dangers posed before and after an accident:
• Helmet
• Gloves
• Boots
• Protective padding

You must always stipulate the PPE you require and the specific activities you want performed. You also need to ensure that your workers abide by these stipulations. Although protective gear might not help to avoid accidents – it will most definitely help to avoid breakage, severe rash and limit the severity of injuries.

Four big benefits of protective gear
• Improved visibility
• Abrasion resistance
• Padding
• Weather protection
What is the protective gear required for greater mining safety?
• Protective gear should conform to anatomy and not slide around.
• Vulnerable areas are the head, hands, knees, elbows, shoulders and hips.
• Gear should be bought for the protective qualities and not for any other reason.

A new generation of mining safety technology is helping protect the lives of workers. Although impressive strides have been made to improve worker safety in the mining industry, miners still face one of the world's most perilous working environments on a daily basis. Mining companies have often been reticent to invest in non-core technology upgrades in the past, but new devices and software can make the difference between life and death.

Here are some of the best safety measures the industry currently has to offer.

The permit-to-work system is a widely recognised safety standard in the mining industry as a means of tracking the authorisations and competencies of employees, as well as identifying the key risks involved with a particular job.

Mining permit-to-work systems have tended to rely on cumbersome paper systems, but a new generation of software is encouraging many mines to digitise the process. There is a South African software company, for example, which integrates all aspects of:
• permits-to-work
• access control and risk assessment
• improving visibility of all works taking place
• tracking each employee's authorisation levels
• tying permits into access control with biometric fingerprint identification.

If an accident does happen, emergency response has to be fast and effective, especially in remote mining areas. The use of an intelligent life care system can provide faster and more accurate on-scene support and diagnosis until professional emergency services arrive.

Installed in nearly every vehicle, mining proximity warning systems are an essential tool to keep mines safe. In open pit mines, they work as traffic alerts and collision avoidance systems and warn operators with audio and visual indications of possible collisions, speeding or rollovers. In addition, the systems also help to improve drivers' traffic awareness, especially in blind spots around their vehicle.

Methane gas, which is released in the process of coal mining, is a common cause for accidents in mines. The natural gas is odourless, colourless and highly flammable, and can explode violently. Methane detection equipment has therefore been in place for several years and has almost certainly prevented some deadly accidents in mines worldwide.

A company in America has now introduced a wireless detection system for methane gas and carbon dioxide (CO2), apparently the first of its kind. Designed for use with a radio frequency identification (RFID) tracking system, it deploys a multitude of sensors in coal mining environments. The information is transmitted wirelessly to surface computers from the primary methane sources deep in a mine, together with tracking of personnel location.

According to the company, the sensors may operate for months on battery power, working 24 hours a day. The biggest benefit is that it can be placed exactly where needed – a shortcoming of currently wired technologies. In addition, the CO sensor warns workers of unsafe thermal conditions, giving them time to react before the potential outbreak of a fire.

One of the hardest tasks for rescue teams after a mine collapse or explosion is finding and communicating with survivors. Without relatively accurate information on the whereabouts of underground workers, drilling down into a mine could do more harm than good. In light of the Langlaagte Mine collapse, this technology is crucial.

Current technologies based on RFID have an accuracy of around 50–500 feet, making them of little use in a high-pressure rescue operation, while GPS satellite location systems can't penetrate underground mines. In the last few years, however, declassified military technology called inertial navigation has brought underground location systems closer to the pinpoint precision that is expected of them.

There is a relatively new tracking and communication device that uses inertial navigation technology to track a miner's direction and velocity without needing external references and is accurate to within 25 feet. The tracking unit also enables two-way communication by voice or text.

The build-up of various types of dust during the mining process holds a number of hidden dangers for underground workers. The two main health issues revolve around the explosive nature of airborne coal dust and the inhalation of harmful silica and respirable coal dust.

There are initiatives being developed to help combat these dangers. One company has developed a coal dust explosibility meter (CDEM) that provides real-time, instant feedback on the safety-critical ratio between inert rock dust and coal dust. There is also a personal dust monitor (PDM) to give miners a tool to track their exposure to respirable coal dust in real time. According to tests, the PDM has proven its effectiveness in a coal mine environment and the immediacy of its data could prove key to miner safety, as current sampling equipment can take days or even weeks to provide feedback.

In the event of a catastrophic mining explosion, rescue operations are incredibly difficult to conduct, because pockets of deadly fumes or the potential for further explosions often prevent human rescuers from even making the attempt. Robotic rescue systems could provide a blueprint for the mine rescue robots of the future.

With deadly explosions still a major problem for the global mining industry – particularly coal mining – the ready availability of high-tech, sensor-based robots that are customised for dangerous underground environments are more necessary than ever.