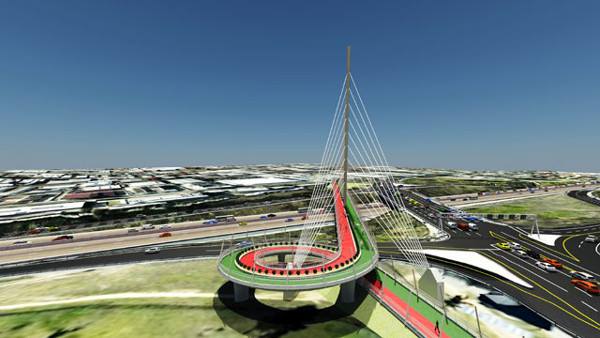 ‘The Johannesburg Development Agency and the City of Johannesburg would like to inform the public that the construction of the Grayston Pedestrian Bridge, in particular the section over the M1 would be proceeding. The project is part of the Rea Vaya BRT Phase 1C connecting Alexandra, Sandton and Randburg to the Johannesburg CBD.

The main objective of the Rea Vaya BRT Project is the promotion of pedestrian mobility and connectivity by improving and promoting the use of Non-Motorised Transport (NMT) and implementing the requisite infrastructure.

A part of the Rea Vaya BRT Project was the improvement of commuter mobility between Alexandra, Sandton and Randburg to the Johannesburg CBD (known as "Phase 1C"). In August 2013, the Johannesburg Development Agency ("JDA") commissioned a study to establish the feasibility of designing and implementing a safe pedestrian crossing over the Grayston M1 Interchange.

On Wednesday 14 October 2015, the temporary structure erected to support the construction of the Grayston Pedestrian Bridge collapsed. As a result of the collapse, 2 (two) commuters were fatally injured, while another 19 (nineteen) were injured. Following the occurrence of the collapse, all activities at the site were halted.

After the collapse of the temporary structure, the Department of Labour (DoL) conducted a preliminary investigation in terms of the Occupational Health and Safety Act, 1993 (OHSA). Upon the completion of the preliminary investigation, the contractor responsible for the construction of the temporary structure, being Murray & Roberts Infrastructure a division of Murray & Roberts Construction (Proprietary) Limited (M&R), was only permitted to carry out work on the ramps and approaches of the Grayston Pedestrian Bridge. No work was permitted to be carried out over the Grayston M1 Interchange.

After the preliminary investigation, a formal accident inquiry was initiated by the DoL for the purposes of determining, amongst others, the cause(s) and underlying cause(s) of the collapse of the temporary structure.

The City of Johannesburg, as well as the JDA have stressed the importance of finalizing the matter as soon as possible.

On 25 January 2017, approval was granted by the DoL for the continuation of the construction of the Bridge over the Grayston M1 Interchange. The said approval was granted after the DoL was presented with the measures put in place to prevent a reoccurrence of a similar event in the future. Such measures include, a new construction method, from a Portal Frame structure to a Balanced Cantilever system; the appointment by M&R of a new subcontractor, Doka Engineering Service, that has proposed and designed the new construction method; and the appointment of an Occupational Health and Safety Specialist, on a full-time basis, to monitor adherence to health and safety legislation for the duration of the construction of the Grayston Pedestrian Bridge.

The measures put in place, by both the contractor and JDA, are extensive and are intended to ensure, as far as reasonably practicable, the health and safety of, amongst others, commuters travelling on the Grayston M1 Interchange. At this juncture, the estimated completion date for the Grayston Bridge is September 2017.

The JDA would like to take this opportunity to apologise to commuters for any inconvenience caused by the construction of the Grayston Bridge and request commuters to adhere to temporary road signs, speed limit and road markings.’

We’ll continue to keep you informed of both the progress of this construction, as well as the progress made in the enquiry.

The Grayston Bridge collapse – and other such failures